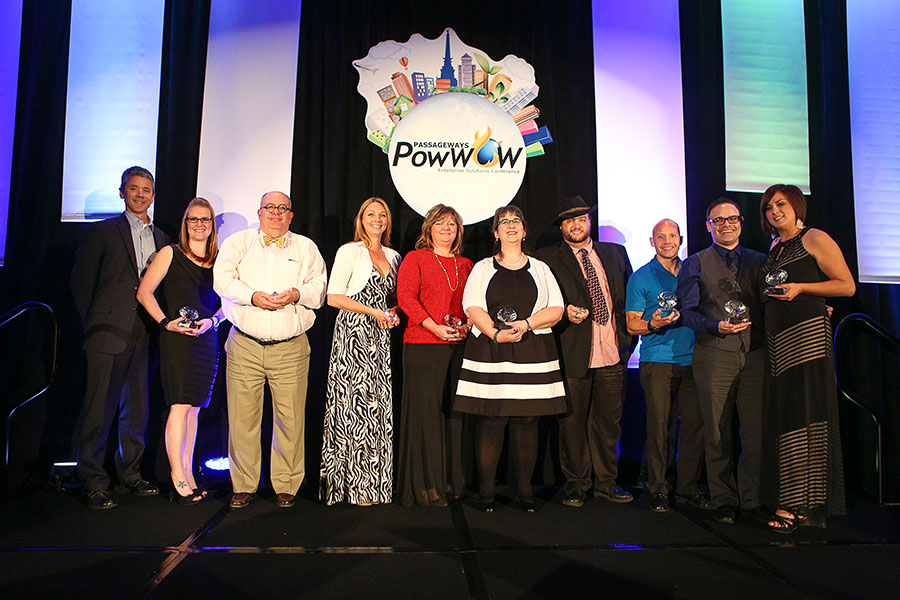 Passageways was founded in 2003, but before its creation, it was just an idea. Ideas challenge our capabilities and inspire greatness. The Luminary is an award given to organizations and individuals whose impact to Passageways has been significant.

This year we honored several luminaries and recognized their contributions that light the path for others.

There are certain Passageways family members that have been instrumental in our day to day interactions and development journeys. Without them, we certainly would not be where we are today. This year recognized four different organizations who have been helped Passageways with their innovative ideas.

Purdue Federal Credit Union was Passageways first customer in 2003, and we even survived being in their basement for a number of years. Since then Purdue Federal has been influential in many ways most recently with the Strategic Planning Matrix. Without the innovative mind of, CEO, Bob Falk the Strategic Matrix would have only been a figment of our imaginations.

American Airlines Credit Union has been with Passageways since 2008 and continues to push the envelope with their creativity and passion to engage through the portal.  The conception of their landing page has come from the original mind of ‘the man in the box’ that always seems to think outside of the box, Carlos Galvan.

The Besties competition has become one of the most popular events at PowWOW each year. This next category of individuals that received a Luminary award this year are those who have previously won a Bestie and will be inducted into our Bestie Hall of Fame.

People’s Utah Bancorp, formerly Bank of American Fork, has been a long time Passageways customer since 2007. In 2009 Ken Burnett won a Bestie for Best New Module. Ken has also played a key role in the development our Learning Management Application.

Belco Community Credit Union joined Passageways in 2007.  Derrick Gebhard took control of their portal in 2011 and developed a unique and engaging approach to customizing their portal.  In 2013 Derrick won a Bestie for Best Internal Development.

Fidelity Bank joined Passageways in 2013. In 2014 Anthony McSwain won a Bestie for Best Internal Development. Anthony’s eye for great design has made their portal distinctive with their culture integration and cohesive branding.  Anthony was also a finalist in the Besties again this year and we are already looking forward to his presentation for next year.

We had one individual receiving a Luminary because of what they represent. Their passion and motivation is crucial to not only their specific organization but to Passageways as a whole. These are the doers, shakers, and movers that are the first to assist Passageways and help bring success full circle. This individual was  honored for what they give to those around them

Enrichment Federal Credit Union joined the Passageways family in 2010.  Katherine Flinchum has been a source of support and inspiration.  Many of you have directly benefited from her dedication either through peer webinars, direct calls, or publications of best practices incorporated through their portal solution.

The Luminary award is given to organizations that have long believed in Passageways. Those that been central in shaping our future. We honor these organizations for charting the course and lighting the path for others.

Credit Union of America joined the Passageways Family in April 2004.  They have implemented both OnSemble and OnBoard.  They also won a Bestie for their Chalkboard implementation.  Lori Smith received the award on behalf of her organization.

Great Lakes Credit Union joined Passageways in January of 2005. They implemented OnSemble and are now getting started with OnBoard! Great Lakes has put their faith in us for many years, and they are now on the fast-track to strategic alignment and new success. Rachel Ringler received the award on behalf of Great Lakes.